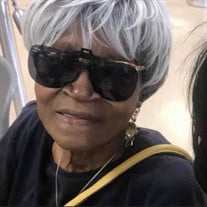 Clara Coleman, 88, of Bloomington, IL, formerly of Columbia, MO, passed away in Bloomington. Visitation will be from 3-5PM on Friday, April 1, 2022 at Progressive Baptist Church. Funeral Services will be held on Saturday, April 2, 2022 at 11AM at the church with another visitation from 10-11AM Saturday at the church. Clara was born August 15, 1933, in Memphis Tennessee. The daughter of the late Adele Boswell and Helen Emma Boswell, she received Christ as her personal savior when she was a child and was baptized in the name of the Father, Son, and the Holy spirit. She was a member of Progressive Missionary Baptist Church until God called her to be with him. Her services in the church were usher, Sunday School Teacher for adults for twenty-five years, 1978 – 2002. Assistant Church Clerk, Lords Kitchen, President of WMU, Drama ministry and superintendent of Sunday School. Clara’s first love for the church was the Sunday School, for she believed it is the reason God brought her into the world. Clara graduated from high school in 1951 at the Central High School in Hayti Missouri. She attended College of Education, UMC. Clara was employed by the University of Missouri Columbia - University Libraries until her retirement and Columbia Public School board after retirement part time. Clara was preceded in death by her mother, father, four brothers and four sisters who all went “Up Yonder’ Left to mourn for her are her children: Marcia Boswell Vanpelt, Eddie Brown of Compton California. David (Mattie) Brown and William ‘Billy’ Coleman of Bloomington, Illinois. Helen Elaine Coleman, Tammy Coleman and Micki Arnold of Atlanta, Georgia. Her Grandchildren: Lil Cat (Staci Lenier, my first grandchild), Ajah, Little Eddie, Shanda lay, Crystal, Little Clara, Clifton Cedrick, Tony Laney, Fabian, (Popo) Brown, Natasha (Tasha) / Sharron (Josh), (Eli, Lilly) Ronald 'RJ' (Jayci) Jason ‘Jay' Jacobs (Ashanti) Lance A. Jacobs (Lance Jr, Amber, Nova), Emily Jacobs (Phoenix, Ali and Pharoah), Adriene (Musa)Great grandchildren: Her sister and brothers: Juanita Lawhorn Aliceteen (LC) Murray, of Omaha Nebraska, Howard Boswell of Hayti, Missouri, Frederick Boswell of Milwaukee, Wisconsin, Joe Boswell Cidney Bowell Allen Boswell Reginal Bowell A host of nieces, nephews and cousins, Church family and many other friends.

Clara Coleman, 88, of Bloomington, IL, formerly of Columbia, MO, passed away in Bloomington. Visitation will be from 3-5PM on Friday, April 1, 2022 at Progressive Baptist Church. Funeral Services will be held on Saturday, April 2, 2022 at 11AM... View Obituary & Service Information

The family of Clara Coleman created this Life Tributes page to make it easy to share your memories.

Send flowers to the Coleman family.