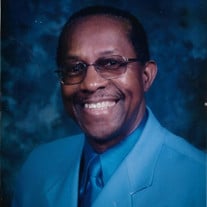 Charles F. "Smitty" Smith, 82, of Sedalia, MO, passed away on Tuesday, January 11, 2022, at Bothwell Regional Health Center. Services will be held on Tuesday, January 18, 2022, at 1:00 PM at Taylor Chapel United Methodist Church in Sedalia. The visitation will be held from 12:00 PM to 1:00 PM at the church on Tuesday. A repast will be held after the burial at Ward Memorial Baptist Church. Services will be live streamed through the HT May & Son Funeral Home Facebook page and can be found at https://www.facebook.com/htmayfuneralhome. He was born February 6, 1939, in Sedalia, Missouri, the son of Joseph Oscar and Nola Crouch Smith. He was a 1957 graduate of C.C. Hubbard High School in Sedalia, Missouri. He served in Vietnam while in the Army. on April 9, 1966, he was united in marriage to Marva Jaco in Slater, Missouri. He retired from Alcan Cable in 1999 after 29 years of service. He previously ran a custom-made shoe business in Warrensburg, Missouri and a furniture upholstery business. He was an avid golfer, bowler and enjoyed fishing and hunting for pheasant with many trips to Nebraska and Iowa. In his later years he enjoyed playing dominoes, lottery tickets and scratch offs. He was a big Kansas City Chiefs fan. He is survived by his wife, Marva and four daughters LaQueta Smith Bentley of Sedalia, Dana Carter (Curtis) of Sedalia, Debra Kelly(Mark) of Sedalia and Vonya Johnson (Lee) of Columbia. Seven grandchildren- Tiffany Carter, Tia Hargrave, Ise'ah Bentley, Brennan Kelly, Antonio Kelly, LeeOnte Johnson, and Shaunta Johnson, one sister Josephine Ross of Salina, Kansas, six great grandchildren, five step grandchildren, six step great grandchildren and many nieces and nephews. He was preceded in death by his parents, five brothers, four sisters and a grandson.

The family of Charles Franklin Smith created this Life Tributes page to make it easy to share your memories.