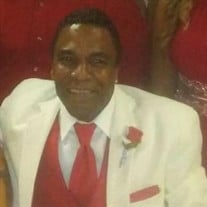 Charles "Tommy" Perry, 55, of Boonville, Missouri slept into the arms of Jesus on Wednesday, August 29, 2018, at Cooper County Memorial Hospital in Boonville. Funeral services will be held on Saturday, September 8, 2018, at 2 PM at St. Matthews AME Church. Visitation will be from 1-2 PM at the church on Saturday. On August 29, 2018, the heavenly Father called Charles Thomas Perry to his heavenly home as God felt that it was time for Tommy to take an eternal rest from his illness. Who is ever ready to lose a son, husband, father, brother, nephew, uncle, cousin, and friend? Tommy was born on December 21, 1962 just a bundle of Christmas joy to the late Charles Leon Perry and Esther Mae Ellis-Perry. Tommy was baptized at St. Matthew’s Chapel AME Church and in recent years he enjoyed attending church. He attended Head Start, traveling with his mother each day, and while growing up he and his brothers were all very athletic. He loved to play tricks on his mother and sisters. As a child, he could be seen running up and down Water St. clowning. He always loved dogs, especially two who were named Buffy and Puffy. He attended most of his schooling in Boonville but moved in with his sister Rhodella to finish out his last two years of high school at Van Horn High School, where he graduated. Upon graduation, Tommy enlisted in the US Navy, and while stationed in Arizona he married. That union produce one daughter. He later moved to California and then returned to Boonville, MO. He worked for Fuqua Homes until it closed, and then Pilot Truck Stop until he became ill. Tommy loved to dress and coordinate his clothing from head-to-toe, including leather coats and his favorite car was a white Cadillac. Dr. Winn, of the Boonville Medical group, would often compliment Tommy on his sharp jackets, shirts, and sweaters. On July 6, 2018 Tommy married the love of his life, Brandy Korte. They had four children and were together for 18 years. He is preceded in death by his father, sister, brother, son, and many other relatives. Tommy loved his family and friends in his own special way and may “Mr. Cool” Tommy Perry forever in perfect peace. Charles Thomas leave to cherish his memory his wife Brandy and children Davina, Treyvon, Charles, and LaShala. His mother Esther Mae Ellis Perry of the city, three sister Rhodella (KCMO), Charlotte (KCMO), Matonia of the city, and one brother Michael (Evelyn) of Germany. Also left are a host of uncles, aunts, nieces, nephews, and cousins.

Charles "Tommy" Perry, 55, of Boonville, Missouri slept into the arms of Jesus on Wednesday, August 29, 2018, at Cooper County Memorial Hospital in Boonville. Funeral services will be held on Saturday, September 8, 2018, at 2 PM at St. Matthews... View Obituary & Service Information

The family of Charles "Tommy" Perry created this Life Tributes page to make it easy to share your memories.