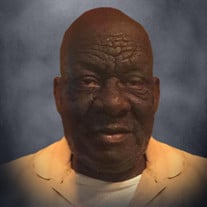 Charles Sandy Harris transitioned into glory at the University of Missouri Hospital on Saturday, February 13th, 2021. He was surrounded by his beloved family as he went home to be with the Lord. Services will be held on Saturday, February 27, 2021, at 1:00 pm at Faith Family Church in Fayette. Visitation will be from 12-1 Saturday at the church. Charles was born on March 12th, 1948 the eldest son of Betty Jean Harris and Noah Douglas. Sandy as we loving called him, was employed by the University of Missouri for over 30 years and upon retiring went on to work for Howard Electric Company until his health began to fail. Sandy had one child and was a family man through and through. A supportive and loving son, a stand up brother, a father figure to his nieces and nephews and so much more. Sandy was always there when we needed him, never hesitating to do what was needed for his family. He leaves behind a daughter Chequelia Vinyard-Ogentoye of North Carolina, sisters; Tammy Harris and Vanessa Smith both of Fayette Missouri, brother Darrell (Novella) Harris of Ullin Illinois, nieces and nephews; Tim (Tessie) Harris of Poplar Bluff Missouri, Eric Harris and Derrick Nicholson both of Fayette Missouri, Ari Harris of Marshall Missouri , Tiffany (Marc) Ballinger of Columbia Missouri , Erica (Ryan) Doxley of Texas, Brittany Nicholson of Philadelphia Pennsylvania, Dashawn (Dara) Harris of Fort Worth Texas, KaMyra Kemp and Kameron Kemp both of Boonville Missouri, Kameron Roberson of Poplar Bluff Missouri and Darrell Harris of Atlanta Georgia and many great nieces and nephews including two whom he helped raise; Atahia Harris and Michael Harris, three Aunts; Esther Mills of Cameron Missouri, Georgia Harris and Doris (Kenneth) Broadus both of Columbia Missouri. He is preceded in death by his mother and father; Betty Jean and Noah, sister Carolyn Harris and brother Donald “Cabbage” Harris.

The family of Charles "Sandy" Harris created this Life Tributes page to make it easy to share your memories.

Charles Sandy Harris transitioned into glory at the University...