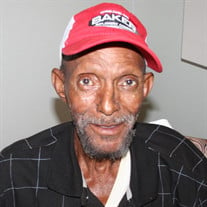 Charles "Tiny" Cason, 71, of Sedalia, Mo., passed into eternity on Wednesday, November 23, 2016 at Bothwell Regional Hospital in Sedalia. Funeral services will be held on Saturday, December 3, 2016 at Wards Memorial Baptist Church in Sedalia at 12:00 PM. Visitation will be from 11-12PM Saturday at the church. Charles Edward Cason was born in Boonville, Missouri on March 8, 1945. He was the youngest of five children. He attended C.C. Hubbard Elementary School in Sedalia where he grew up and was known to everyone as “Tiny”. He was a generous fun loving free spirited person. His favorite pass time was spent watching black and white western movies and sitting with his buddies on his porch and in the yard. Later on he enlisted in the Job Corp and was sent to Washington Dc, Michigan, and Texas. He worked for Crammer Construction as a roofer and for his close friend Nat Newbill for 30 years. He visited with his sisters in Washington DC and Chicago but could not wait until he was back at home in Sedalia. Tiny is preceded in death by his father, Ira Cason, and siblings Gerald Cason, Phyllis Heard, and Carol Cason Manly. He leaves to cherish his memory his sons Dante Newbill, Frankie Newbill both of Kansas City, Missouri, Marvin Newbill, Blue Springs, Missouri, his daughter Carmen Mattox, California, his mother Gladys Cason Robinson, his sister Iris Cason Dougans, ten grandchildren, three great grandchildren, and a host of nieces, nephews and cousins. Also special friends Brenda Scroggins and Leroy Pinkett whom have been there for him through it all. Special friend Antoinette Peck thanks for your support. He also leaves to cherish his memory his special dog “Champ”.

The family of Charles Cason created this Life Tributes page to make it easy to share your memories.

Send flowers to the Cason family.