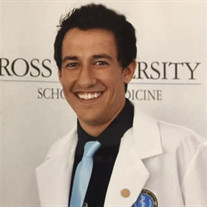 Chandra Narayan Roy MD, “Chad Roy”, aka “Swifty MD” online, was born in Springfield, Missouri as the only child to the parents of Lakshmi Narayan Roy and Rose Mary Smith Roy of Springfield, Missouri. Chad was proceeded in death by his paternal and maternal grandparents: Hem Chandra Roy and Sheela Boti Roy, and Gene Smith and Fortune Smith. He is the nephew of Doctors Rabin and Protima Roy. He was affectionately known by his mother as her “Unico Hijo” (Only Son), by his father as “My Aak Piece” (My One Piece) and by his grandmother Fortune as “God’s Gift to Humanity”. He left this world on Memorial Day, May 31, 2021 peacefully, sitting at his computer holding his guitar. Chad was a unique, brilliant and sensitive human being. He was funny, quirky, and had the courage to be himself. At the age of two he was fascinated by a medical book that showed the first heart transplant recipient. A few years later when his parents took him to the Science Center at St. Louis he would run ahead and was mesmerized by videos of open heart surgeries. He had a lifelong thirst for medical knowledge. Chad attended Field Elementary School, Cherokee Middle School, and graduated from Kickapoo High School. He earned a Bachelor of Science Degree in Biology from Drury University, Springfield, Missouri. He was a member of Kappa Alpha Fraternity. He co-published ten research papers in Chemistry that were published in “Peer Reviewed” Scientific Journals. After volunteering endless hours with Habitat for Humanity and tirelessly helping in the clean up process for the tornado victims of the massive Joplin, Missouri tornado of 2011, he attended Ross University School of Medicine, graduating in 2017 with an MD Degree, achieving Highest Honors. He obtained a highly competitive Residency in Emergency Medicine. Chad was constantly helping people and trying to save their lives. This included medical emergencies in the air, on the street corners of Chicago, convenience stores and with gang member victims in the ERs of Chicago. He showed each one respect and compassion. Before his death, Chad was in the process of creating a universal medical data base to facilitate medical research and was consulting with research doctors and medical personnel worldwide. This was for the purpose of research in the medical field to extract information needed for diagnosis and treatment and the manufacture of new medications. Sadly this goal remains unfulfilled. He was a talented musician, loved painting and making T-shirts for his friends and their children. He was very active socially on his online chat groups. His parents’, family members’ and friends’ lives will never be the same without him. Visitation/Memorial service will be held at St. Luke United Methodist Church in Columbia, Missouri on June 5, 2021 from 3:00 PM to 6:00 PM. A future Celebration of Life will be held in Springfield, Missouri . Date/Time To Be Announced In lieu of flowers or donations Chad would have preferred that you help someone in need.

The family of Chandra “Chad” Roy created this Life Tributes page to make it easy to share your memories.

Send flowers to the Roy family.