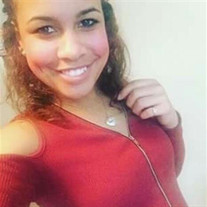 Cameshia Lee Cole, age 21, of Independence, Missouri, answered the Masters call on Tuesday, November 22, 2016, at Center Point Medical Center in Independence, Missouri. Funeral services will be held on Saturday, December 3, 2016, at 12 PM at Higginsville High School Gymnasium. A visitation will be held from 10 AM to 12 PM at Higginsville High School Gymnasium. She was born on October 4, 1995, in Warrensburg, Missouri. She is the fourth and youngest daughter of the Late Curtis A. Cole and Stacy (Howard) Cole. She was a 2014 graduated of Higginsville High school. During her years at Higginsville High School she was an exceptional athlete, she excelled in the following sports: softball, basketball, track, and various other sports. After high school Cameshia went on to serve her country in the Missouri National Guard where she completed basic training on June 20, 2015. At age 17 Cameshia started work at Crazy Cone and later was employed I the health care field where she received her Medical Aide License. She was a devoted member of Greater New Home Baptist Church where she received Christ. Cameshia loved being around her family and friends especially her four nieces as they brought joy to her heart. She loved music, dancing and being a practical joker, which brought joy to everyone. She leaves to cherish her memory her mother Stacy (Howard) Cole of Independence, Missouri, three sisters Chyrice Cole of Independence, Missouri, Curstie Cole of Higginsville, Missouri, Kiana Cole of Independence, Missouri, three step sisters Ashley Scott, Toni Falls, and Norrisha Odell, one brother Anthony Falls, her grandfather Lonnie Lee of South Dakota, and James Howard of Lincoln, Missouri, her four special nieces Arimayia and Aria Bell, Zaylin Strickland and Alessia Terranova, a host of aunts, uncles, cousins, and many dear friends. She was preceded in death by her father Curtis A. Cole, her aunts Helen (Cole) Billups, Regina Cole, and her grandma Dawn (Cole) Gainious.

The family of Cameshia Cole created this Life Tributes page to make it easy to share your memories.

Send flowers to the Cole family.