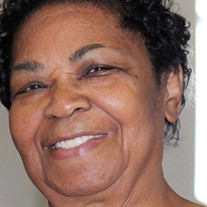 Betty R. Hayes, 78, of Marshall, MO passed away on Sunday, January 26, 2020 at her home. Services will be held on Saturday, February 8, 2020, at 12:00 PM at Mt. Olive Baptist Church in Marshall. Visitation will be held from 11 AM to 12 PM at the church. Betty Ruth Hayes went peacefully into the arms of the Lord on Sunday, January 26, 2020 as she was surrounded by her loved ones at her home. Betty Hayes was born on December 27, 1941 in Yates, MO to William and Margaret Arnold. She married John Hayes, Jr. on November 1, 1958. Betty was a faithful member of the Mt. Olive Baptist Church where she was a member of the Inspirational choir, the Mother Board and a faithful member of the Sunday School, as well as the WMU. Ones would frequently find Sister Hayes and Sister Lola Williams at someone’s church on Sunday afternoons. They traveled together in the van until the van left them stranded a few times. The devil did not stop them because Lola began to drive her car to the out of town church services. Mrs. Hayes was employed at the Marshall Habilitation Center until she retired. While employed there she was a Developmental Assistant/Med Tech. Once Betty retired she became an active member of the Marshall Lunch Bunch and the Marshall Senior Center Group. This allowed her to attend weekly luncheons at the Marshall Park and different restaurants in the area. During the week, if Mrs. Hayes was not at lunch, you would find her playing bingo with longtime friends, Lillian Harris and Ruby Hayes. Betty leaves to cherish her memory two sons Ron Hayes and Kevin Hayes both of Marshall, MO, four daughters Martha Saunders of Madison, TN, Noveta Shepherd of Louisiana, MO, Rita (Greg) Fisher of Independence, MO and Rhonda Hayes of Marshall, MO, one sister-in-law Jennifer Arnold of Columbia, MO, fourteen grandchildren, thirty-one great-grandchildren, seven great-great grandchildren, and a host of nieces and nephews. She was preceded in death by her parents, her husband, one great-grandchild, two brothers Robert Franklin Arnold and William Garrett Arnold and two sister Vera Lee Saunders and Della Mary Brown.

The family of Betty Ruth Hayes created this Life Tributes page to make it easy to share your memories.

Send flowers to the Hayes family.