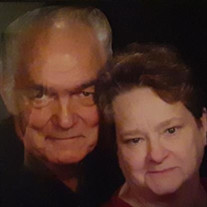 Barbara Elaine Bossaller Morrison Barbara was born to Richard Lee Bossaller, Sr. and Melinda Bossaller on February 21, 1948 in Boonville, MO. She was the last of 4 children for Richard and Melinda. The family attended church at the Gilliam Baptist Church. Living on a farm in Gilliam, she and her 3 brothers were always up to some mischief. They could often be found trying to figure out if the tadpoles in the pond were girls or boys. She attended high school at Slater, graduating in 1966. Her friends remember her as strong-willed, faithful and a true-blue friend. She was married to Carl Edward Morrison in July 1969. Driven to succeed, she attended Nursing School in Boonville, MO and graduated with her LPN degree and enjoyed many years as an LPN in local nursing homes and at the Cooper County Hospital. She suffered a stroke in 2006, and had to give up her nursing and retired to enjoy time with her family. Barbara enjoyed traveling with family. She took a cruise to Alaska with her son and his wife, road tripped with her daughter, Marsha to Mexico, Colorado, and a train ride to Colorado, then Kansas City with her family. Barbara visited her son in Texas with her daughter, Sherry several times and enjoyed the warm weather there. Branson was a favorite vacation spot of hers, enjoying the music shows and comedies there with Carl. She was also an avid quilt maker, enjoyed knitting and sewing, often teaching her friends to crochet. Barbara had a green thumb. Her house always included African violets, peonies, and roses. She enjoyed the quiet peacefulness of her back deck where she enjoyed time while taking care of her father at her home. Time with her kids, grandkids and great-grandkids, was a favorite past time for her and Carl. Always a caretaker, she could diagnose aliments and showed deep concern for anyone in her life. She will be missed deeply by her friends and family. Barbara was proceeded in death by both her parents, brothers: Eldon Wayne and Richard Lee. She is survived by her husband, Carl Morrison of Boonville; brother Harold Dean Bossaller and wife Pat of Columbia; son Jerry Dale Morrison and wife Samantha and daughter Elaine of Tomball, TX; daughter Sherry and husband Jerry Wayne Thompson of Boonville, MO; daughter Marsha and husband Justin Gargione of Versailles, children Blake and Brooklynn; grandson Brandon Thompson and his children Aubrey, Reigan, Tatum, Willow and Emma; grandson Dalton Thompson and great-grandchild Mabel; and several cousins, nieces and nephews. May she rest in peace. in lieu of flowers donations can be made in her name to the Alzheimers Association. https://act.alz.org/site/Donation Funeral services will be held at a later date.

Barbara Elaine Bossaller Morrison Barbara was born to Richard Lee Bossaller, Sr. and Melinda Bossaller on February 21, 1948 in Boonville, MO. She was the last of 4 children for Richard and Melinda. The family attended church at the Gilliam... View Obituary & Service Information

The family of Barbara Morrison created this Life Tributes page to make it easy to share your memories.

Barbara was born to Richard...

Send flowers to the Morrison family.