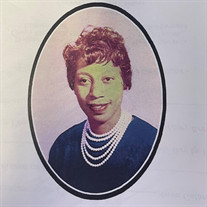 Arneda Elizabeth Logan, 87, of Fulton, MO, passed away on Friday, August 13, 2021 at her home surrounded by her family. Visitation will be held on Friday, August 20, 2021 at St. James United Methodist Church in Fulton from 5-7 PM. Funeral services will be private. Services will be live-streamed through Facebook on Saturday, August 21, 2021, at 1:00 PM at https://www.facebook.com/htmayfuneralhome. Arneda Elizabeth Logan, 87, of Fulton, MO, peacefully transitioned at home to be with the ancestors on Friday, August 13, 2021. She married Henry W. Logan on June 14, 1952 in Fulton, MO and they were married for 65 years until his death in 2017. Born to this union was one daughter, Marian L. Logan, and two sons Henry C. Logan and Angelo G. Logan. She attended Carver Elementary grade school in Fulton, MO where she was a member of the Young People's Progressive Club(YPPC) and graduated from Lincoln Laboratory High School in Jefferson City, MO. She was an avid bowler and travelled all over the nation with teammates to bowling tournaments. She was also a longtime member of St. James United Methodist Church in Fulton where she served as financial secretary, treasurer, communion steward, and preparing the Sunday bulletin. She began working for the Fulton Public School District in 1964 and retired in 1995 after 32 years as administrative secretary to principals of Carver Elementary School and Fulton Middle School. Arneda and Henry owned and operated Logan Construction Company for over 43 years and owned and managed several real estate properties in Fulton. She served as secretary of the Local chapter of Missouri Retired Teachers Association(MRTA) and was an officer on the local board of the American Red Cross. Arneda and Henry were among a dedicated group of alumni and supporters in the early 1990s , who helped purchase the Carver Elementary School building from the Fulton Public School District. The building served as a focal point for the black community. Arneda then served as a founding member of the George Washington Carver Memorial Inc. She is survived by one daughter Marian of Fulton, MO, two sons, Henry C. (Janet) of Phoenix, AZ., and Angelo of Fulton, MO, one granddaughter Lamia of Fulton, MO, and one grandson Cullen(Jenny) of Phoenix, AZ, five brothers-in-law Russell of Fulton, MO, Robert C of Holt Summit, MO, Earl of Jefferson City, MO, George Trenton(Pam) of Kansas City, MO, and Alvin of Fulton, MO, and great grandchildren, nieces, nephews, cousins, grandnieces and grandnephews. She was also preceded in death by her father Amuel in1943, mother Matilda in 1977, step-father Onie Radican in 1978, and her sister Geraldine in 1940, grandparents, and several aunts and uncles.

Arneda Elizabeth Logan, 87, of Fulton, MO, passed away on Friday, August 13, 2021 at her home surrounded by her family. Visitation will be held on Friday, August 20, 2021 at St. James United Methodist Church in Fulton from 5-7 PM. Funeral services... View Obituary & Service Information

The family of Arneda Elizabeth Logan created this Life Tributes page to make it easy to share your memories.

Arneda Elizabeth Logan, 87, of Fulton, MO, passed away on Friday,...