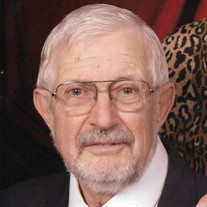 Arlin Duane Baker, 81, died at his home Monday, April 13, 2020. Arlin was born to Paul and Judith Baker in Marceline, Missouri on September 10, 1938. In his early years, in addition to fishing and hunting, Arlin enjoyed playing high school baseball and football. His family lived next door to a greenhouse where Arlin worked after school, this is where he developed his interest in plants and flowers. Following high school, and a brief career in the insurance business, Arlin moved to Boonville in 1969 to work at Schnell Floral. He purchased the business in 1975, founding Baker Floral -- probably the only florist shop in which the back work table doubled as a fish cleaning bench, and where the coolers were stocked with beer to share with after-work visitors. Arlin retired in 2001 after selling Baker Floral to his daughter, who worked alongside him for many years. In addition to actively participating in the Boonville business community, Arlin was very active in the conservation organization Ducks Unlimited, recognized and honored for his 25 years of service. He especially loved the Missouri River and regaled us with trivia and many interesting stories. Arlin was a die-hard St. Louis Cardinals fan, known for loudly “coaching” the players and adding colorful commentary from his recliner in the living room. For many years he was a very devoted member of the Cooper Masonic Lodge 36. An avid fisherman, hunter, gardener, and cook, Arlin was happiest when he was outdoors enjoying nature, tending his garden or cooking for a large crowd, which he did regularly. He is survived by his wife, Jackie (Denny) Baker; daughters, Tammy Brenner, Nancy Duy (Rob), Stacey Woods (Matt), Marcey Caldwell (Keith), and Natalie Wells; Sisters, Linda Korte (Bob), Betty Hainds; and Aunt Mary Saylor; 13 grandchildren and 5 great-grandchildren. Arlin was preceded in death by his parents, and daughter, Brenda Uhl. A celebration of Arlin’s life will be held at a later date. Donations in memory of Arlin can be made to the Cooper Masonic Lodge 36, in care of HT May & Son Funeral Home, 405 Sycamore, Boonville, MO 65233.

The family of Arlin Duane Baker created this Life Tributes page to make it easy to share your memories.

Send flowers to the Baker family.