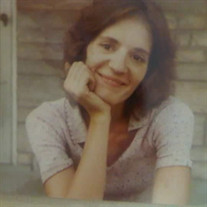 Anita Jeffries, 62, of Stoutland, Missouri, passed away on Tuesday, January 3, 2017, at the University of Missouri Hospital in Columbia. Arrangements are pending at H.T. May & Son Funeral Home in Columbia. Anita is survived by two daughters Dorothy Hempel and her husband Clay of Lebanon Missouri and Donna Owen of Stoutland Missouri; grandchildren Austin Hempel, Matthew Hempel, Casey Owen, and Micheal Owen. Her special adopted grandchildren James McEntyre, and Kali Marshall and their children Tessla and Cooper McEntyre. She is also survived by two sisters Helen Abbott of Kansas City and Mary McDowell of Lamar Colorado and one brother Larry Barlow of Lamar Colorado. She is preceded in death by her brother Richard Smith of Nickerson, Kansas. Anita was born on August 2, 1954 in Wichita Kansas to Clark Williams and Verna Elston, who preceded her in death. On June 24, 1970, she married the love of her life, Alvin Addison Young. Over 26 years, the couple welcomed their two daughters into their home and bestowed upon them the love of life and family and the values of hard work. Alvin preceded her in death July 20, 1997. On June 19, 2003, she married Leroy Jeffries. From this marriage Anita found a love of travel and tractor pulling, creating many friendships that lasted through the years. Leroy preceded her in death July 25, 2007. Anita is survived by many nieces, nephews, family and friends. While she had been retired for three years, Anita made friends wherever she worked; whether a factory position or as an adult educator or office administrator, she put her heart into her work and genuinely cared for the people she worked with and served. A funeral will be scheduled for a later date, as Anita loved spring and the first blooms rejuvenating life. The family would like to thank the nurses and team members at the University of Missouri Columbia Cardio unit. They gave Anita the upmost care, compassion, and dignity as she started her final journey to heaven.

Anita Jeffries, 62, of Stoutland, Missouri, passed away on Tuesday, January 3, 2017, at the University of Missouri Hospital in Columbia. Arrangements are pending at H.T. May & Son Funeral Home in Columbia. Anita is survived by two daughters... View Obituary & Service Information

The family of Anita Jeffries created this Life Tributes page to make it easy to share your memories.

Anita Jeffries, 62, of Stoutland, Missouri, passed away on Tuesday,...

Send flowers to the Jeffries family.