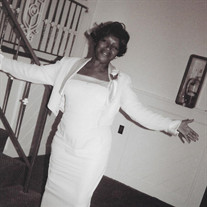 Angeline Jackson, 70, of Sedalia, Missouri passed away on Monday, August 14, 2017 at Bothwell Regional Health Center. A graveside service will be held on Friday, August 18, 2017 at 1 PM at Crown Hill Cemetery in Sedalia. Angeline R. Jackson has went to be with her heavenly father on August 14, 2017 at Bothwell Regional Health Center. She was born on October 1, 1947 in Sedalia, Missouri; the daughter of James and Bessie Jackson who preceded her in death. Angeline will be truly missed by her family and friends. Angeline worked her early years at Swifts Chicken Company and Lamy's Manufacturing, which she enjoyed; after years she did part time and seasonal work for the Salvation Army Thrift Store and Missouri State Fair. She enjoyed shopping, puzzles, the outdoors, her morning TV shows, and her coffee and fried chicken. She was a cheerful, helpful, enjoyable, and pleasant person. Angeline would welcome anyone with open arms. She will be missed in many eyes and loved in many hearts. Survivors include three children; Adrian Jackson of Sedalia, Donna (Jackson) Fulcher of Sedalia, Andrew Jackson of Sedalia, and son-in-law Tony Fulcher of Sedalia; three sisters Evangeline Jackson of Sweet Springs, Missouri, Almeda Clay of Sedalia, and Alfreda Byrd (Otis) of Fulton. She also leaves seven grandchildren Malcom L. Briscoe, Shareden Staten, Keiasha Jackson, Raekwon Jackson, Tionne Fulcher, Matthew Briscoe, Mason Briscoe, and one great grandchild Alayish Matthews. Besides her parents she was also preceded in death by her son Donald N. Jackson, three brothers, and six sisters.

The family of Angeline Jackson created this Life Tributes page to make it easy to share your memories.

Angeline Jackson, 70, of Sedalia, Missouri passed away on Monday,...