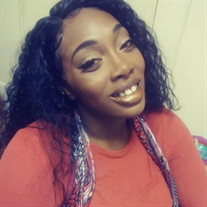 Altamesse Smith, 31, of Columbia, MO, passed away on Saturday, March 21, 2020. Visitation will be held Saturday April 4, 2020 at H.T. May and Son Funeral Home in Boonville. Altamesse was a devoted mother, daughter, sister, TT, family member and friend. Altamesse died unexpectantly Saturday March 21, 2020, at the age of 31 while in her home with her family. Altamesse is survived by her parents, Charles and Ingrid smith; Her children Jamuriana Smith age 13, Keshawn Smith age 10, Danielle Grayson age 8 Jozyiaha Cowans age 6, Trina Cowans age 5, Joslynn Cowans age 4; Grandmother Shirly Brooks, Sisters Mekaelia Smith, Anastasia Humphery, Theresa Johnson, Shanice Carter & Katalena Smith; Brothers Kahelen (JAY) Smith & Keith Johnson; 5 nephews, 9 nieces and a host of cousins. She is proceeded by her niece Ivory Kimbrough and Uncle Kahlil Crowell. Altamesse was born in Columbia Missouri February 19, 1989. She graduated from Douglas High School in 2007. Altamesse had a heart of gold, there wasn’t anything that she would not do to help those in needs. Her larger than life personality simply captivate everyone she encountered. You could not help but be drawn into her orbit. Meme could make you experience every emotion all at the same time. The impact that meme has had on everyone’s life is unmeasurable. She is the personification of everything good. Even in her passing she’s bonds us together in a time when social distancing is at the forefront, not even COVID 19 can separate our love for you. Altamesse often referred to herself as the black sheep of the family and that she was. She stepped to her own beat no matter the consequences. Right or wrong she was determined to be the very best person she could be. Even while pregnant meme would be quick to fight someone over her siblings. Whenever her younger sister needed a babysitter a ride or was to lazy to go down the street for a juice meme was there to the rescue. If you asked for just one memory everybody would rave over meme cooking. Not only was her cooking amazing she would feed the entire neighborhood. One of the truest evidences of meme generosity and love for her family was when we loss sweet Ivory. Meme was the first one on the scene ready to care for her sister’s babies while having six of her own. Meme was fun, electrifying entertaining and a pure joy to be around. Now don’t get me wrong Meme was full of drama and she was sure to bring it to you each day. She became known as live because Meme was not ashamed to invite you into her world by sharing her experience on Facebook live. Life will never be the same without our MeMe. Rest in Peace baby girl until we meet in paradise. John 5:28,29- “Do not be amazed at this, for the hour is coming in which all those in their memorial tombs will hear his voice and come out…to a resurrection of life” There will be a viewing only held at HT May & Son Funeral Home in Boonville Missouri Saturday April 4th from 1pm to 5pm. The viewing will be limited to 10 persons at a time due to the COVID-19 pandemic. There will be a live video tribute for Altamesse and a live dj mix party to celebrate the life of meme streamed via fb from 6pm to 9pm

The family of Altamesse Smith created this Life Tributes page to make it easy to share your memories.

Altamesse Smith, 31, of Columbia, MO, passed away on Saturday,...